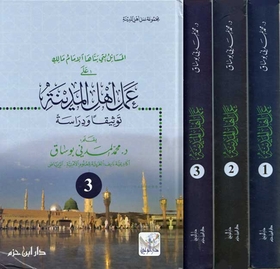 Malik did not record the fundamental principles on which he based his school and on whose basis he derived his judgements and to which he limited himself in the derivation of his rulings.

In that respect he resembled his contemporary, Abu Hanifa, but not his student, ash-Shafi’i, who did record the principles he used in derivation and defined them precisely, specifying the motives which moved him to consider them and their position in deduction.

Nonetheless, Malik did indicate the principles he used in some of his fatwas, questions and the hadiths which had muttasil (uninterrupted), munqati’ (broken), or mursal (link missing) isnads and balaghat (without isnad) hadith, even if he did not precisely explain his method or defend it or explain the motives which moved him to adopt it and why he used that method rather than

For instance, the Muwatta’ makes it clear to us that Malik uses mursal, munqati’ and balaghat hadiths but does not explain how he chose them because it does not go into the problems concerning the isnads. The reason for this is that Malik only transmitted from people in whose mursal and balaghat hadith he had absolute confidence. That is why his great concern was with the choice of transmitter. When he had confidence in the character, intelligence and knowledge of the transmitter he dispensed with the chain of narration.

Malik clearly stated that he took the practice of the people of Madina as a source and explained the motives which led him to do so. The Muwatta’ shows that he used it in making analogy, as he when he made an analogy between the wife of a missing man when he returns to her after she has married someone else and someone who divorces his wife with a revocable divorce and then takes her back when she knows about the divorce but not the taking back and consequently remarries.

Thus in the Muwatta’ you will see clear statements or indications of Malik’s principles of derivation even if he did not actually clarify or identify them specifically. For instance, he did not clarify the rules and grades of the underlying legal principles (‘illa) in analogy and such things. The fuqaha’ of the Maliki school have done with Malik’s fiqh what the fuqaha’ of the Hanafi school have done with their school – studied the secondary rulings and derived from them what can validly be employed as fundamental principles on which to base deduction. They called the principles they derived in this way the ‘fundamental principles (usul) of Malik’. For instance, they say that Malik employed certain textual principles which they called’mafhum al-mukhalafa’ (an interpretation which diverges from the obvious meaning of a given text), ‘fahwa al-khatab’ (implied meanings of a given text), and ‘dhahir’ (apparent meanings of a given text). They say that he also said certain things about general unspecific texts. The truth is that although these principles are transmitted as having been formulated by him, they are in fact derived from secondary judgements reported from him; and the specific proofs of these principles are derived from the actual context or were formulated by the fuqaha’ who came after him. Deduction from texts can only validly be undertaken when the necessary evidence exists.

We do not automatically have to accept these principles as being the usul of Malik’s school since they are the formulations of scholars who post-dated him but nor must we refute them simply because they were not transmitted by Malik himself. We are bound, however, to reject those of them which we think contradict any clear, firm statements he is definitely known to have made or those which apply to some secondary rulings he made but not to most of them. Scholars deem that established propositions should be adopted and respected unless the proof of their opposite is established. In that case they have to be rejected because they have been proved invalid by clear evidence not by simple denial.

These principles are mentioned in various places in the books on the science of usul which Malikis have written or in the glosses which other Malikis have added to such books. They say about every principle that Malik’s opinion regarding it was such-and-such but that is in fact only deduced from secondary rulings. In at-Tanqih, you will see that al-Qarafi mentions a principle and then mentions Malik’s opinion about it which may differ or agree with the majority view. The sum of those opinions which comprise the usul of the Maliki school, whatever the strength of their ascription to the Imam, is without a doubt the basis on which the positions of the Malikis are based and that from which the judgements of those both in early and later times in that very productive school are derived.

We will mention the usul in general and then we will go into some details to demonstrate the bases for deduction in the Maliki school, the reason for its growth and spread, the great number of the questions with which it deals and its suitability for various environments. We will attempt to clarify the principles which are particular to it and which are considered to be one of the things which distinguish it from other schools and give it a flexibility which is not found in other schools even though it is a school founded on tradition more than the others. In Tartib al-Madarik Qadi ÔIyad mentions the general foundations of Islamic fiqh which are: the Noble Qur’an, its explicit texts (nusus), its apparent meanings (dhawahir) and implied meanings (mafhumat); the Sunna – mutawatir (with multiple transmission), famous (mashhur) and single hadiths; then consensus, and then analogy. Then he mentions the principles used by Malik and his position. If you look straight away at the methods of these Imams and the establishment of their principles in fiqh and ijtihad in the Shari’a, you will find that Malik pursued a clear methodology

in respect of these principles and ordered them according to their respective ranks. He put the Book of Allah first and put the traditions with it, placing them before analogy and opinion. He left anything which was not considered probable by reliable men known for their sound knowledge, or when he found that the great majority of the people of Madina did something different and contrary to it. He did not pay any attention to those who interpreted things according to their own opinions: explicitly declared that such rulings were false and baseless. (Tartib al-Madarik, p. 16) Qadi ‘Iyad also lists the basic foundations of the school of Malik as being the Book and Sunna, the practice of the people of Madina and qiyas (analogy), but he does not mention any others. He does not mention ijma’ (consensus) or the other methodological principles which distinguish the Maliki school, such as masalih mursala, sadd adh dhara’i’, custom (‘urf), and certain other principles which other people have mentioned. In the commentary on al-Bahja sixteen basic principles are listed:

• An explicit text (nass) of the Qur’an.

• An indicative (dalil) text, which may have an interpretation which diverges from its obvious

• An implicit (mafhum) text, which has an added meaning coinciding with its obvious meaning.

• An expositive (tanbih) text, which reports the underlying reason for a judgement (like the

statement ‘it is filth’).

• The same five categories in respect of the Sunna;

• The practice of the people of Madina (‘amal ahli’l-madina).

• A statement of a Companion (qawl as-sahabi)

• Blocking of the means (sadd adh-dhara’i’).

• There is disagreement about a seventeenth principle which is whether or not to take note of a dispute (mura’a al-khilaf). Abu’l-Hasan said that istishab (presumption of continuance) is one of them. (al-Bahja, p. 126, vol. 2) This list is logical. An unequivocal text of the Qur’an, an apparent text, what is implied, its proof, and its clarification are all connected to the same fundamental source, the Qur’an, and the same is true of the same five elements when applied to the Sunna. They are mentioned individually because they do not have the same weight where deduction is concerned. An apparent text of the Qur’an is not as strong as an unequivocal text and a text which can have a divergent meaning is not as strong as an apparent text and so forth.

In at-Tabaqat, as-Subki stated that there were more than five hundred fundamental principles in the Maliki school. He may have been referring to the legal precepts derived from secondary rulings. There is a distinction between them and the usul of the school. The usul are the sources for deduction, the methods of deduction which also involves the strength and ranks of legal evidence and which of them to prefer when they are in contradiction. Legal precepts (qawa’id) are general precepts which clarify the method of exercising ijtihad in the school and the links which connect minor cases. The precepts are later in their conceptual and actual existence than the secondary rulings because the precepts are the derived unifying principle of the rulings. In the case of the usul, it is clear that they must exist before the secondary branches because they are the prerequisites which the faqih himself uses in his deduction. So the Qur’an is advanced before the Sunna, the unequivocal text of the Qur’an is stronger than its dhahir text and all other procedures used in making ijtihad. The fact that these principles are revealed by the

secondary ruling does not indicate that the secondary rulings precede them. Rather they were in existence previous to them and the secondary rulings indicate and reveal them as the child indicates his parent, the fruit indicates the plant, and the crop indicates the the type of seed. The most precise enumeration of the principles of the Maliki school is that given by al-Qarafi in his book Tanqih al-Usul. He stated that the foundational principles of the school are: the Qur’an, the Sunna, the consensus of the people of Madina, analogy, the statement of the Companions, together with masalih mursala (considerations of public interest), ‘urf (custom), ‘adat (common usage), sadd adh-dhara’i’ (blocking the means), istishab (presumption of continuity), and istihsan (discretion). These are the fundamental principles of the Maliki school and we will discuss each of them and its rank in deduction. Next, we will discuss the Qur’an and the Sunna and nass texts, dhahir texts, dalil texts and mafhum texts since Maliki fuqaha’ ascribe these distinctions to Malik. Each of them has a specific rank in deduction in the Book and Sunna as defined by the Maliki view.